﻿
﻿Last week I posted about the book The Soul of an Octopus by Sy Montgomery. It was such a beautiful book that appealed to my senses and filled me up with knowledge. I'm so excited that I can't help but share more of what I learned about these oozy, intelligent, and curious creatures.


-          Octopuses play so much that people have invented toys or puzzles for them. If they aren’t entertained and mentally stimulated, they tend to cause trouble.
-          They are individuals with their own unique personalities. In aquariums, they are known to spray water at caregivers on purpose when they are displeased or simply do not care for the person. They also blast water to play.
-          They eat by grabbing food with a tentacle and passing it from sucker to sucker like a conveyer belt. They don’t bend their tentacles to place fish directly into their mouths. It might be because they are savoring the taste of their food along each sucker. 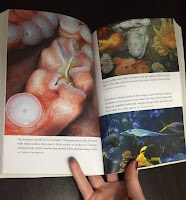 -          While most animals that are capable of camouflage (for example, chameleons) have less than a dozen fixed patterns, octopuses command 30 to 50 different color patterns, and in less than a full second they change color, pattern, and texture.
-          Their eyes are color-blind. New studies are showing that octopuses might be able to see with their skin, which might explain how they know to change colors for camouflage.
-          60% of octopuses’ neurons are in their arms, instead of their brains. According to Montgomery, this means that “if an arm is severed from an octopus’s body, the arm will often carry on as if nothing has happened for several hours.”
-          When baby octopuses hatch out of their eggs, the mother blows them away, and they become plankton, floating among millions of other tiny animals and plants, until they grow big enough to live on the ocean floor. Only 2 in 100,000 babies survive to sexual maturity.
-          Octopuses smell like geraniums when they experience stress.
-          Octopuses are predators that actively hunt, and they’ll eat many different kinds of prey. Eating different animals means using a variety of different hunting techniques. Octopuses can camouflage themselves to hide from prey and then ambush. They can also shoot through the ocean, conducting quick chases. If prey are leaving the water, they can use their arms and suckers to crawl out and catch them. Conversely, octopuses are preyed on by many other animals, and they similarly have several defense mechanisms. They can release ink that instantly creates a cloud in the water to divert predators. They can swim away quickly. They can camouflage to hide or change patterns and colors quickly to cause predators to lose track of them. They also build shelters. Having this vast toolbox implies that octopuses can reason and anticipate the actions of other animals.

In her book Sy Montgomery offered insight into many animals other than octopuses, and their abilities were also quite fascinating from a sensory perspective:


-          Electric eels dream.
-          Sea stars extrude their stomachs outside their mouths to digest prey, so it appears that fish simply dissolve or melt.
-          Anacondas in captivity are known to cuddle with their caretakers whom they like and trust.
-          Dolphins have been observed getting intoxicated as a group– they pass around a toxic puffer fish and behave differently, as if they are in a trance.
-          Mama birds and their chicks chirp to each other when the babies are still in their eggs.

Sy Montgomery has published books about several other animals she has studied, and I'm looking forward to reading another soon. In the meantime, I'm on an octopus scavenger hunt. Another creative rendition came across my path. This shimmery blue mustached octopus sits on top of an umbrella displayed in downtown Maplewood to promote this Friday's Let Them Eat Art event.