Sensory Word of the Week 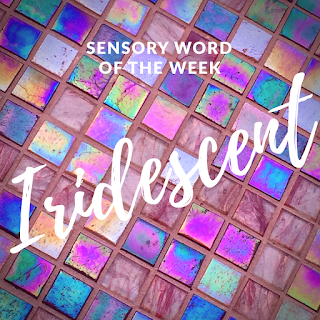 According to oxforddictionaries.com, iridescent is a descriptive word that means "showing luminous colours that seem to change when seen from different angles." Dictionary.com cites that the word comes from the Latin roots iris, which means "rainbow," and escent, which means "beginning, becoming, tending to be." Iris was the Greek goddess of the rainbow. As a messenger she climbed the multi-colored arc like a stairway as she took messages from Mount Olympus to the earth (Merriam-Webster.com). 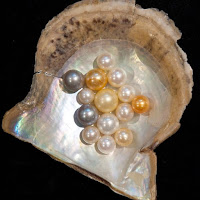 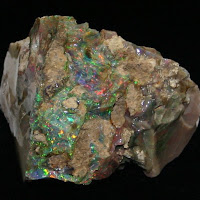 Iridescent has a couple escent-ended synonyms. Dictionary.com defines pearlescent as "having an iridescent luster resembling that of pearl." Pearls (above left) are small hard lustrous spheres that form inside ocean-dwelling animals like oysters when miniscule irritants enter their shells. Opalescent refers to "having a milky iridescence" or "exhibiting a play of colors like that of the opal." Opal (above right) is a silica compound mineral that, like a pearl, is also cherished as a gem.

Image Source: Wikimedia Commons
According to lifescience.com, iridescent coloring is often a defense mechanism—it confuses or warns predators. Studies show that birds have a harder time pecking at bugs that are iridescent. The middle layer of structures in an octopus's skin, known as iridophores, creates iridescent displays; the blue-ringed octopus (above left) flashes 60 iridescent blue rings when it's agitated, signaling poison (scientificamerican.com). However, defense doesn't explain all animal iridescence. The plumage of Nicobar pigeons (above right) have became brighter and more colorful as the species evolved with few natural predators; they didn't have to hide (arkive.org). In peacocks, iridescent feathers differentiate males from females. Iridescent scales or skin might also help some cold-blooded species reflect sunlight to regulate their body temperature (lifescience.com).

In my journey through sensory words, I am realizing that there is a plethora of beautiful words that end with escence (in the noun form) or escent (in the adjective form), and they are words that describe unique sensory experiences or abilities. The Sensory Word of the Week series of posts will focus on these words over the next few weeks. What are some of your favorite escent words, and what do they describe?
at July 26, 2017