The Soul of an Octopus 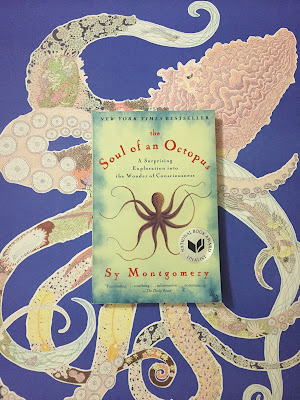 About a month ago, I had breakfast at the highly recommended Butterhorn in Frisco, CO, and afterward wandered across the street to Next Page Books & Nosh. Within a few minutes, The Soul of an Octopus: A Surprising Exploration into the Wonder of Consciousness by Sy Montgomery caught my eye. I never knew much about octopuses, and within the first six pages of this book, I learned several things that amazed me:

-          Octopuses have a lot of defense mechanisms: ink “like an old-fashioned pen,” neurotoxic venom, saliva that will eat away flesh, and hundreds of powerful, dexterous suckers that give the animals iron grips.
-          They have beaks.
-          The Pacific octopus hatches from a grain-of-rice-sized egg, and it’s one of the fastest-growing animals on Earth, reaching the length and weight of a man in only three years.
-          Since they don’t have bones, full-size octopuses can pour their bodies through an orange-sized opening or something even smaller.
-          They change color and texture constantly—for example, when they’re excited, they’re bumpy and red, and when they relax, they turn smooth and white.
-          They can taste with their skin, anywhere on their body. (Imagine what this sensation might be like!) Their sense of taste is strongest in their suckers.
-          Each octopus has a dominant eye, meaning that one eye pivots in its socket to focus on something. Each eye swivels independently.
-          When you detach from an octopus’s grip, the suckers make plunging, popping sounds, just like I thought they would!
-          They are enormously playful, curious, and expressive.


In the first chapter, Sy Montgomery fondly reflects on her multi-sensory interaction with Athena, the first octopus she met in captivity, and says “To borrow a phrase from songwriter John Denver, she filled up my senses.” Simply reading this book filled up my senses; I was entranced in a multi-sensory world as I turned every page. Montgomery’s writing was beautifully descriptive and thought-provoking.


Montgomery shares her stories of visiting the New England Aquarium regularly as an official “Octopus Observer.” As she forms relationships with a few different octopuses at the aquarium, she experiences “Octopus Time,” or a lack of time perception caused by a state of awe, focus, and joy. She is humbled by their existence. Their bodies and their daily functioning are so drastically different than what we as humans are normally conscious of. As she observes and wonders about how octopuses think in unique ways that are impossible for us to even wrap our minds around, she shifts her perspective of the world and is inspired to explore it further. To do so, she takes up scuba diving so that she can see octopuses in the wild.

Montgomery describes in wonderful detail the vivid colors, exotic shapes, and serene sensations of her underwater adventures around the world. As I was reading, I kept hearing Ringo Starr’s playful lyrics in my head: “I'd like to be under the sea, in an octopus's garden in the shade.” While I don’t think Montgomery ever referenced that song in her book, her words mirrored another Beatles song as she described following an octopus along the ocean floor as “a magical mystery tour, on which our guide changes shape and turns psychedelic colors.”


Late in the book I especially enjoyed contemplating the idea of “soul” alongside Montgomery. She shares that according to some, “soul is our innermost being, the thing that gives us our senses, our intelligence, our emotions, our desires, our will, our personality, and identity.” She expresses that the octopuses she knew changed her life forever, gifting her with “a deeper understanding of what it means to think, to feel, and to know.” She clearly believes that octopuses have a great deal of “soul,” and she has me convinced.


I am often drawn to books that have sensory appeal, and I’m excited to share them on this blog. If you have any suggestions for books that would send me on a sensory-filled journey, please let me know!

If your curiosity is sparked, I'll be sharing more sensory-filled facts about these fascinating ocean-dwellers on the blog soon...
at July 07, 2017