Sunday Senspiration: Awakening the Senses Under the Big Top 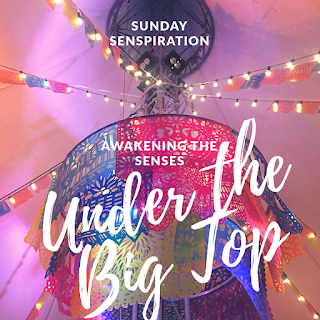 I have loved @CirqueduSoleil for a long time. I did ballet and gymnastics growing up, and more recently, I’ve dabbled in acro yoga, so there is a big piece of me that is in awe of the sheer strength, flexibility, skill, and grace of the performers. However, Cirque du Soleil is so much more than a circus with impressive acts—each show is like a volcano erupting with multi-sensory beauty, and it sweeps up the audience, carrying everyone into a magical world where it’s nearly impossible for your mind to wander back to reality until the show is over. Live original music makes Cirque performances come to life—singers and musicians are often on stage in full costume or creatively tucked into the shadows. The sets and costumes are always bursting with vivid colors, and both are extremely intricate and imaginative, filling up whatever environment they are in. I was once at a show where a giant wisteria flower bloomed on stage, and suddenly the air was filled with a sweet flowery scent.


I have seen touring Cirque du Soleil shows in local arenas, and I’ve seen shows that have permanent Las Vegas residencies in beautiful custom-made theaters. However, to me, the best place to see Cirque is under the big top. It’s a much more intimate environment, and the stage draws people in from every angle, with performances taking place in nearly 360 degrees. Dramatic shadows and projections onto the walls of the tent add to the immersive environment. Plus, it’s just fun to walk inside a big top circus tent. 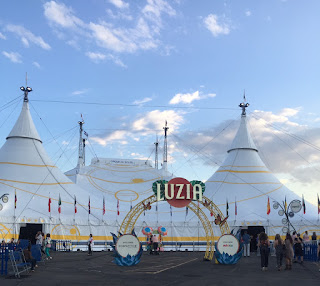 When I traveled to Denver earlier this summer, Cirque du Soleil’s LUZIA big top was in town, and I had a seat in the sixth row. LUZIA: A Waking Dream of Mexico was inspired by Mexico—its culture, its traditions, its natural environments. At the beginning of the show as the stage slowly came to life, with animals creeping out and lights getting brighter, as if morning was here, I felt something softly brush across my shoulders—I turned around to see a few performers embodying birds flitting through the aisles. Soon a larger-than-life monarch butterfly took the stage with wings vibrantly fluttering in the wind, perhaps as a visual symbol of this Canadian circus company connecting to Mexico, as monarchs are known for their epic migrations from Canada through cool mountain passes and river valleys in the US, and on further to the high mountains of central Mexico where they roost (and back). Throughout the show numerous performers wore elaborate costumes and moved in ways that embodied a number of plants and animals native to the country—fish, armadillos, hummingbirds, crocodiles, snakes, a jaguar, a horse, bright blooming flowers, cacti. 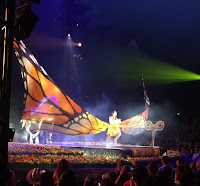 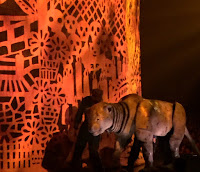 The show gets its name from a combination of two Spanish words. Luz in Spanish means “light”, and lluvia means “rain.” Throughout the evening, we drifted back and forth through these two elements, light and rain. There were moments when the stage exploded with lively citrus colors, embodying sun and summer itself, and there were also cool, calming moments of rain. Water at times sprinkled, and at other times poured, down from above onto the middle of the stage, and performers went right on with their acts on hoops and trapezes through the showers. When it rained, we heard echoes of thunder and felt a cool breeze coming from the stage. 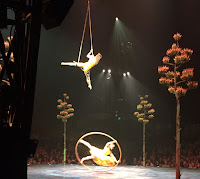 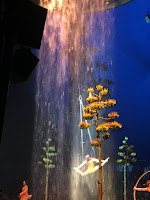 Just as we went back and forth between light and rain, we went on a sensory journey through a number of different settings, both urban and natural, past and present. We saw soccer, hacky sack, lucha libre, and the filming of a movie; we were transported to a dance salon, a city street, a traditional feast with altars created for Dia de los Muertos, guitar and brass music filling the tent. We plunged under the ocean and into natural swimming holes. We saw both the haze of a semi desert and the tropical lushness of a jungle. 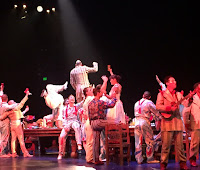 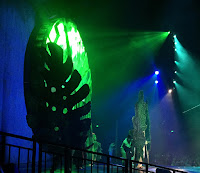 When the show ended and the audience was walking out that night, we experienced yet another surreal sensory moment—although it was a beautiful night when we walked in, it had clearly stormed during the show. Everything in sight was drenched, and there was still lightning and thunder in the not-so-far-off distance. We had all assumed the thunder we heard during the show was part of the special effects, but it seemed quite likely that at least some of it was real. 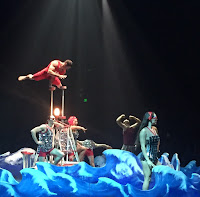 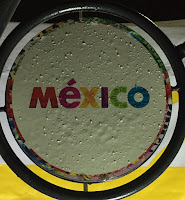 LUZIA: A Waking Dream of Mexico was a beautiful, multi-sensory performance, but I realize that it was an artistic interpretation—one that inspired me to learn more about the real Mexico, its people and cultures. I am grateful to live and work alongside many Mexican Americans in St. Louis who have shared their music, art, food, stories, and other traditions, and I look forward to learning even more from them in the future.


If you ever have a chance to see Cirque du Soleil, especially under the big top, I highly recommend it. LUZIA is currently in Chicago. What captivating performances, circus or beyond, have engaged your senses?